Earlier this year I had the pleasure of being chosen to be an ambassador for the Annapolis Running Classic in Annapolis, Maryland. This had been on my radar as my first race post-Marine Corps, and I was so excited to run the 10K as part of their “A-Team”.

Friday night: I headed straight to Annapolis right after work, and with traffic it took me about 1:15. The Navy-Marine Corps Stadium was easy to get to. I got in and out of the “expo” with my bib quickly and painlessly. There wasn’t too much for the expo, just a few vendors and some race merch. I spent the night with friends who live a mile away. It was a much needed night of friend time, chicken parm and wine, and games. My boyfriend even made an unexpected appearance! I got to bed around midnight – later than I had hoped but not the end of the world.

Pre-race: I was up and out of my friend’s house by 5:45 and parked at the stadium just 10 minutes later. In hindsight, I probably didn’t have to leave so early. But I’d rather be early than sit in traffic. I took a short nap and had my UCan before heading out. I first tried a porta jon that was FULL. I mean, FULL. It must have been from the last Navy football game. After meeting some ambassadors at the Blue Angels plane (it was great to meet you, Jenny!), I was happy to find the race’s porta jons. I waited for just a few minutes, but they were fresh and still had *TP*.

Corral thoughts: The corrals were self-seeded and I seriously had no idea what to do. I was completely winging this race. The furthest I had run since the marathon was 5 miles, and my intention was to just have fun and finish with a smile. I ended up lining up just behind the 2:15 half marathon pacer (approx 10:15 mile) to see if I could stay with them for a bit.

Miles 1-2: I caught right up with the pace group after the start, and aimed to stay with them for as long as I could without needing to start the intervals I used for marathon training. The first mile was fast (9:40) but I trusted the pacers. (The back half of the half is hilly, so they needed to bank some time). At first I felt like I couldn’t keep up, but about midway through mile 2 I realized that my body wanted to run. I left the group right around the 2 mile mark (10:10).

Miles 3-6.33: I didn’t even think when I first left the group, I just went. This portion of the race brought us down a slight downhill, around the state Capitol and into Downtown. It was so beautiful, and the downhill was welcomed. This is where I started to struggle during  the Zooma 10K, but here I kept feeling like I could go faster. I hit mile 3 (9:38) and knew I would be close to a PR if I could hold that pace. Miles 4-5 were a series of out and backs though town. I didn’t mind it, as it allowed me to see the people in front of me. Mile 4 was a bit of a mental struggle due to a slight uphill. Mentally, I wanted to walk so badly, but all of the stairs at November Project made my legs feel untouched going up that hill (9:40). I had a GU that I nibbled on not because I needed the sugar, but because I was hungry in general.

Mile 5 is when I started to get competitive with myself. I knew a PR was in reach, and I was feeling good. Like, real good. I had a fire that I don’t normally feel during races. I started focusing on people ahead of me and kept passing them, left and right. It felt so good. I hit mile 5 in 8:58. This is when I knew a sub-1:00 was in reach, and I was going for it. The last mile was tough. There were slight uphills the whole way, with a short, steeper one as you entered the stadium parking lot. I kept checking my watch, and when my mile 6 chimed in at 9:14, I knew I would be so close.

Finisher’s party: The Annapolis Running Classic is known for their great afterparty. The dozen oysters is super unique, although not to my liking. I did LOVE the unlimited beer. However, one beer at 8 AM after a hard run left me with a headache, and I had to drive home anyways. The band that was playing was fantastic and if I didn’t have somewhere to be I would have stayed all day to listen to them. On another note, I liked that the premiums were picked up AFTER the race – so that you had to finish to get your shirt (#sorrynotsorry). The 13.1 runners received a sweatshirt while the 10K runners got a t-shirt. 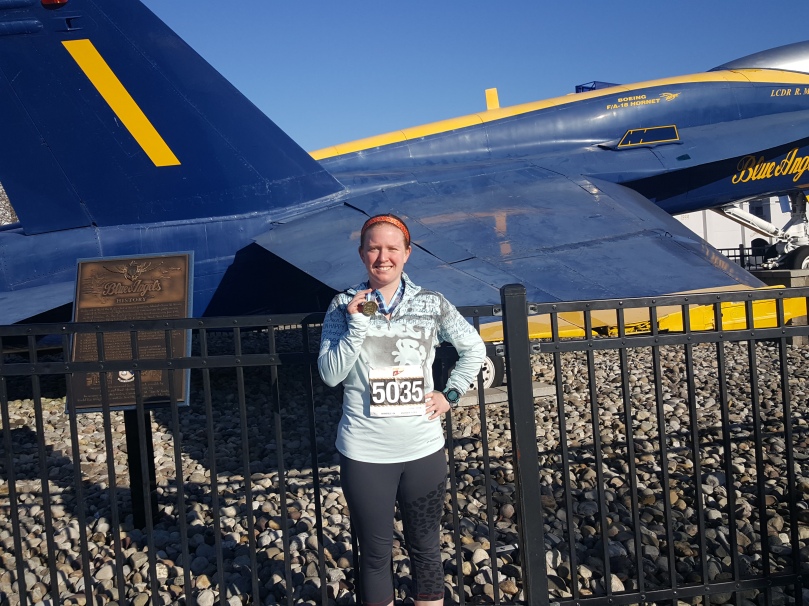 Post-race thoughts: I was so high on emotions after this race. I earned a PR for the first time since April 2015. This wasn’t a PR by being my first race of a certain distance, I worked hard for it. I felt so much redemption after running a 1:02:39 at the Wildman Biathlon and coming in dead last in the 10K leg of the race.

Most importantly I felt like all of my hard work was finally worth it. I often put so much pressure on myself at races, and when I flop I hate myself and consider giving up. I went into this race with zero plans or expectations. Actually, the night before, I told my friend “The night before races I always get lost in dreaming that I’ll wake up and be fast.” While I may not be “fast”, this was the fast I have been waiting for and knew that I was capable of. And it felt awesome.

Verdict: This race had some flaws, but all in all, I really liked it and will be back. It’s a great fall race to either finish off a racing season with, or to do just for fun. A review of the race itself (not just my experience) will be up on BibRave.com soon.

Disclaimer: As a Annapolis Running Classic A-Team member, I received a complimentary entry into this race. As always, all thoughts and opinions are 100% my own.