On March 10th I ran my 19th half marathon, which was the Rock n Roll DC Half Marathon! I ran this race last year as a training run and had a fun time. This year, I went into this race hoping to see where my fitness was two months post-marathon. I also tend to have mixed results running “repeat” races, and was curious as to how I would do!

Expo day: The Rock N Roll races require you to go to the expo, so I headed in mid-day on Friday. Packet pick-up was a breeze. When I entered the expo floor, I was very underwhelmed. Last year, I had an amazing time and spent 2 hours there. I even fell in love with one of my favorite snacks, Krave Jerkey, there. This year I was very disappointed. I was in and out in about 20 minutes, pretty perturbed at the half-empty floor, no music, and overall lack of energy. The only money I spent was signing up for  next year because you can’t beat a $59 half marathon. After the expo, I went into race day very under-enthused. 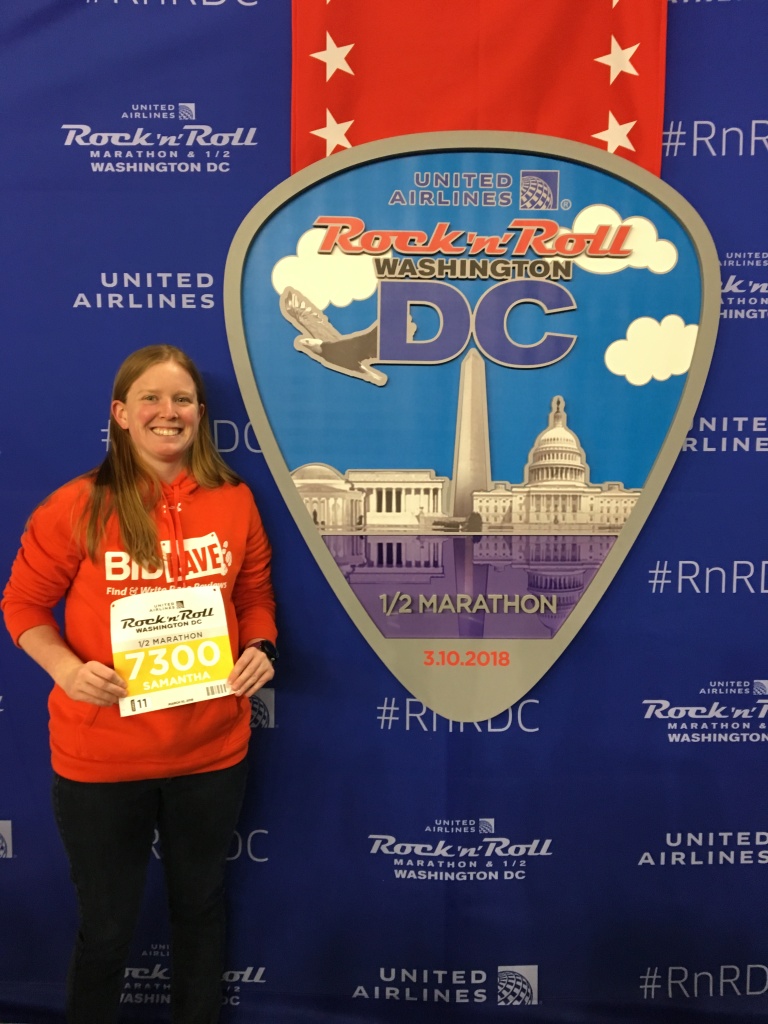 Friday night: For dinner I went to one of my favorite restaurants – Nando’s! I had grilled chicken wings and mashed potatoes with tons of yummy sauce and a glass of red wine. I was thankful to spend the night at a friends’ house to cut down on some driving on Saturday morning. After a glass of wine and some game-playing, I was upstairs at about 10:00 to “lay out my flat Sam” and was asleep around 11. I ended up choosing to go with three layers on top (thermal Nike layer, Oiselle flyte long sleeve, and Oiselle Volee singlet) due to the projected start temperature of about 30 degrees with some wind.

Pre-race: I was “up an at’em” around 5:30, out the door at 6, and in the parking lot at the New Carrolton metro station for 6:30. Once on the train, I met two other runners who kept me occupied until just around race start! I almost ran with one of them, Marie, as it was her first half marathon and she asked if she could pace with me. Unfortunately, right before our corral was about to go, I really got the urge to use the restroom so I left the corral and sprinted the two blocks to the porta-john’s. I’m so glad I made the choice to do so, although it meant leaving Marie. The sprint to/from the porta-johns worked as a good warm-up, as it was cold and I didn’t stretch well! 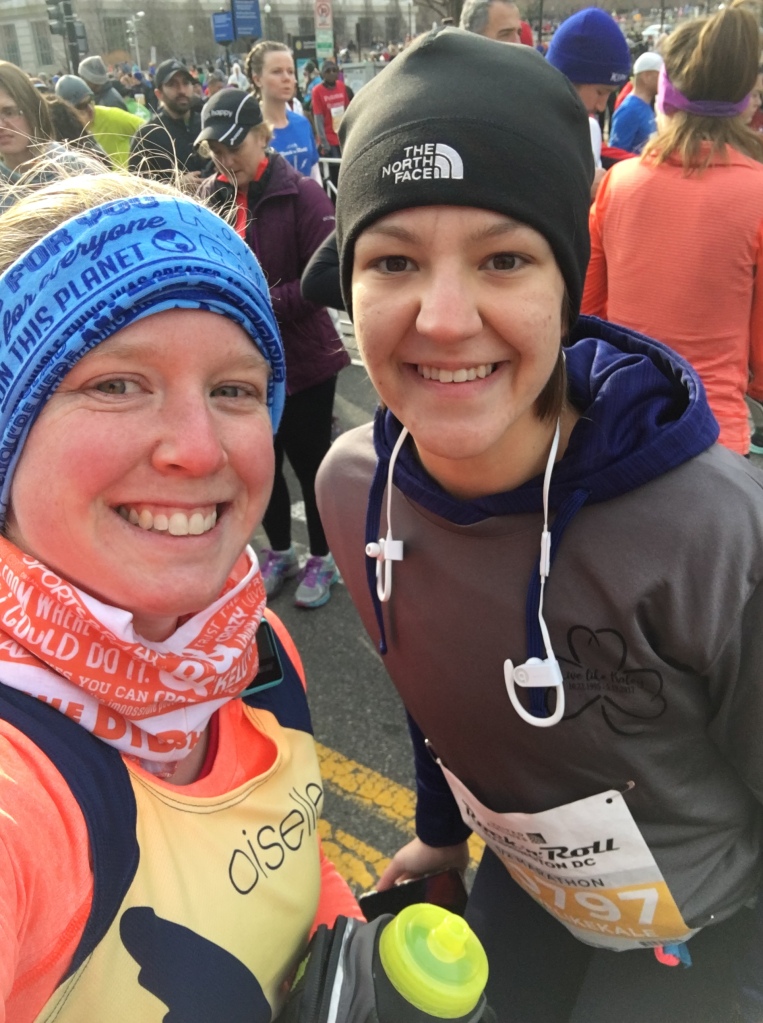 Game plan: As I mentioned, my goal for this race to see where my fitness was at. Following the strategy of Elizabeth at Running for Robert I put tape on my watch so while I could hear each mile ding, I would be just running off of feel. I set my interval timer to 2:00 run/:30 walk intervals and hoped to keep that up for the entire race.

Miles 1-5: The first few miles brought runners past some of DC’s famed monuments over and under a bridge, and into Rock Creek Park. There were some slight ups and downs, but nothing too hard. The worst part was the crowding, especially between miles 2-5. From watching the clocks, I knew I was running around a 10:00 mile pace, and didn’t feel like I was taxing myself too hard. I wanted to make sure not to expend too much energy because I knew the dreaded hill was coming up at mile 6. Splits: 9:55, 10:00, 9:52, 10:01, 9:49.

Miles 6-10: These were some more interesting miles. First, mile six brings a giant hill with about 150 feet of gain in a quarter mile or so. YUCK. I did a little better on this hill than I did last year and wasn’t as dead at the top. While climbing up the hill I caught up with Marie! I was happy to see that she was doing well. I told her she could follow me but I lost her quickly as I was boogying. Once at the top I started to feel super over heated from my physical exertion as well as the sun. I ended up stopping on the side of the road to de-layer. After losing about two minutes, I got about a mile before there was a fire truck ripping down the street – as it was coming behind me I lost about 30 seconds stopping to the side to be cautious. After those two events, mixed with some rolling hills, it took me a while to get back into a groove. By the time I hit mile 10, I was feeling good again but also felt like I had to push harder to keep my speed where it was. Splits: 9:52, 12:23 (de-layer and fire truck), 10:03, 9:50, 9:43.

Miles 11-finish: This is where I made myself proud. My legs felt so tired, I had no clue what time I was running, but mentally I fought through the pain and the doubt to keep going. I had never truly tapped in to my mental power like this in a race before. I kept telling myself that I was strong and I could do it. Passing the Volee’s cowbell corner around mile 11.5/12 or so, someone yelled “You look so strong!” I’m glad they said that because I was afraid I looked like I was riding the pain train – which I totally “thought” I was. 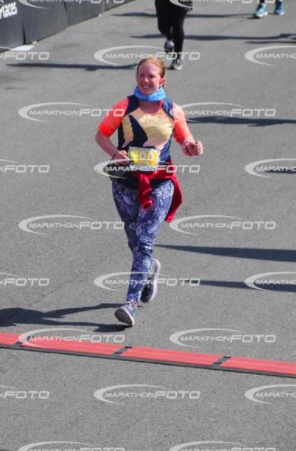 My finish experience was so much better than last year because I wasn’t stressing about finding someone else who had my warm clothes. I sat for a few minutes with some water and chips before grabbing my bag. I was so impressed with the presence of changing tents – being able to completely change from my wet shirt was a game-changer! While it was a bit chilly, I stayed long enough to enjoy (most of my) post-race beer. I was pretty sore after, but a mile walk to the post-race brunch with the Oiselle Volee helped me loosen up a bit! I loved meeting other Birds (some I’d talked to/followed online for years), the food was delicious, and the mimosa(s?) were wonderful. Another mile walk back to the subway was needed for the legs, and I spent the night relaxing! (Actually, I went on a date? But alas, he “disappeared” shortly after that night).