Right after finishing the Race 13.1 Half Marathon, this race popped up on my Facebook feed. A half marathon for $35? Count me in! I was a little weary about the trails, but I’ve run on them before and I was ready for a challenge. The race was on Superbowl Sunday (2.5.17) and I was ready to earn my feast for that night.

Saturday: I headed to Columbia (about 25 minutes from my boyfriend’s place) around noon to pick up my packet. The store was packed with two packet pickups. I was in and out without a hitch. I don’t remember doing much during the day except having a pasta dinner and an epsom salt bath. After packing up for the next day and a couple of glasses of wine, i was off to bed.

Pre-race: The race was to start at 8, and I arrived just after 7 to assure decent parking. There was plenty of parking, so I just stayed warm in my car until around 7:40 because boy was it COLD! It was a 20 degree “real feel”, and would warm up to about 40 by the time we were to finish. There were about a half-dozen porta potties, but I didn’t have to wait long. I easily found Ava, who coached me for the Marine Corps Marathon, who I’d be running with for at least the first half of the race. I also found Beth. She is an ambassador for the race company and ran the 10K!

Miles 1-6.3: The first lap was exciting because the trail race was such a refreshing feeling! Ava and I ran without intervals, but walked when needed and up big hills. The first 2 miles were groomed trails, before 2 miles of more technical terrain, then the 2 miles back to the start. The two miles of technical terrain was hard, with steep uphills and downhills. Our pace slowed significantly during these miles, which was okay. Worst part: the nozzle on my hydration pack broke within the first mile. WOMP. I was still able to drink, but it required more work. We finished the first lap in 1:14.

Miles 6.3-12.7: Ava mentioned separating from me for the second lap, but I’m glad she stayed! After the 10K’ers were done the course was pretty lonely. The second lap definitely felt like it dragged on, but I also felt more comfortable on the trails. We walked more as my legs were getting tired and I kept tripping over my own feet. Around mile 9 my hamstring started to get really tight, and I started struggling hard and walking a lot around mile 10. I kept telling Ava to leave (I always do this when I run with people) but she is very sweet and never left me without coming back for me. The last two miles were rough as I definitely didn’t drink enough, but coming around to the finish I was still able to kick it in. The course was short which really irked me, but it wasn’t the end of the world. 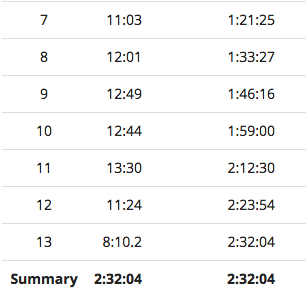 Finish line:  I was so thankful we were given a heat sheet at the end! It had warmed up and I was having trouble regulating my temperature. We got a pint glass as a finisher’s gift, which I’m a fan of. During the last few miles I was craving Fritos – and they had some at the end. CUE HAPPINESS. I didn’t stay for long, and by the time I got to Jake’s, I was very sore and stiff. We went to lunch, where I had a delicious meatball sub and then relaxed before getting ready for the Super Bowl! He had a little party where I successfully passed out in the second half of the game.

Post-race thoughts: This race was a fun challenge and change of pace. It was just the right level of trail and challenge for someone who sticks to the road and rail trail. It was very well organized and CHEAP. I would do it again, but likely stay with the 10K. I was hurting for too long after this race, and normally after a half marathon I’m good the next day.

Verdict: This race had some flaws, but all in all, I really liked it and would be back again and recommend it to others! Check out my other review of the race on Bib Rave!

Have you run any trail races lately?

While I am back in New Hampshire this summer, I decided I should enjoy the scenery and assortment of running trails as much as possible. Great Glen Trails is an amazing trail system about 15 minutes from my house that is open for different outdoor sports year around. They offer different weekly race series, including a spring and fall trail running series and a summer mountain biking series. I participated in the bike series twice when I was younger (with my mom, brother, uncle, and grandfather) and placed first in my age group both times. Additionally, I ran three races there during my high school cross country days. I figured the $45 fee for 8 weeks (I was only able to do 5 due to moving) was a great price for running awesome trails and having the opportunity to win awesome raffle prizes at the end!

Week 1: 42:55 (3.7 miles)– This week was admittedly a disaster. I went in undermining the difficulty of the course- the previous races I had run at Great Glen were all on the wide, groomed trails. Much to my demise, I went out way too fast and was shut down by the single track trails. Additionally, I realized during the second week that I took a wrong turn and ran an additional .5 miles on an uphill, switchback, single-track trail. I felt miserable when I finally crossed the finish line.


Week 2: 35:11 (3.2 miles)– The second go-around was much better than the first. I went out slower and respected the course more. I realized around .3 miles in that I had to go right at where I went left the first week which made life much easier. I walked significantly less than the first week and felt more comfortable. I even passed a few people this week! I started to really enjoy adventuring on the different terrain.

Week 3: 34:11 (3.2 miles)– This week was rainy, and I ran garminless. I liked the freedom of not having my watch. In regards to the course I felt better than last week – I walked less, but still an amount that I was not happy with. I made it almost all the way up the huge, torturous hill in mile 2 withough stopping to walk. I rolled my ankle in one of the trail sections, but kept going!

Week 5: 33:52 (3.2 miles)– This week was the best of them all, which is fitting since it was the last week. I achieved my fastest time, only if it was by 19 seconds. My most proud moment was reaching my goal of not walking throughout the whole course! I struggled with the huge uphill around mile 2, and the last ascent at mile 3 – but I was determined not to walk. Sure, I ran as slow as a sloth, but I still kept on moving. After the hill in mile 2, I was hitting a 9:15 pace on the groomed parts of the course, and took it slower on the singletracks. 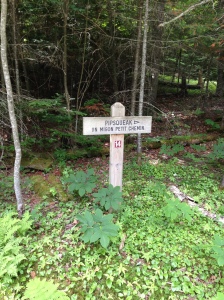 Unfortunately, because I couldn’t run Week 4, I wasn’t eligible for any raffle prizes 😦

Doing this trail series was a great experience! I was challenged, but I also was able to see improvements each week which was awesome and just what I was looking for. While I went in and had set my expectations a little too high for how I achieve, the challenges I approached were so beneficial. During the last week, I found myself more aware of my pace, and conserved myself in the first mile to prepare for the hard second mile – even running a negative split! I would love to participate in the Fall series if I wasn’t moving!
I have fallen in love with trail running, and will keep going back to Great Glen to use the trails throughout the summer as a break from the roads (and the sun!). The hills will help prepare me for what I know will be a hilly half marathon in September. I can’t wait to also find and explore some trails in New York when I make the move!

The first week of my half marathon training (well, for my 12 miler, then half) is complete! I am using the Hal Higdon “novice 1” plan that has been tailored a bit so that my long runs will fall on Saturday instead of on Sunday.

Monday 6/2 – 3.1 miles (29:38), 14,130 steps. Took my grandmother and her sister to Portsmouth to go shopping and bought myself these beauties! (I didn’t check my training plan in the morning…I was actually only supposed to do 2 miles this morning – whoops.)

Tuesday 6/3 – 3.5 miles (36:37), 12,975 steps. This morning’s run was hard physically and mentally. I had a different breakfast than normal and it was warmer than I was expecting. The sun really got to me and I thought about giving up and walking home. But I did it and I was proud of making it through the struggle. Also walked 2.4 miles with my mom.

Thursday 6/5 – 3.2 miles (35:11 – on trails), 12,115 steps. This week’s attempt at running trails for the Solomon Trail Running Series  was much more successful than last week. I learned early on that I took a wrong turn last week and ran .6 extra (that .6 was a very hard, switchback/hill singletrack trail). This week’s attempt was much more enjoyable and I walked less. I’m looking forward to improving more next week! Walked an additional 1.3 miles while my mom did 2 min walk/jog intervals. I really enjoy helping her reach her new fitness goals!

Friday 6/6 – Rest, 10,854 steps. I woke up itching to run. I understand the purpose of rest days, but this is a day that I wished they weren’t necessary. Walked 1.8 miles while my mom jogged. I swear she got me the garmin so she could use it 😛

Saturday 6/7 – 5 miles (56:24), 10,370 steps (at 10:30 am). This was the first “official” long run of my half marathon training. It did not go so hot, at all. I couldn’t get into a rhythm and I kept experiencing stabbing pains in my shin. Between that and feeling nauseous starting at around mile 3.5, I almost gave up and went home. While I walked a few times, I’m glad I did the whole 5 miles. I can’t say I’ve been eating/drinking healthy the last few days which probably didn’t help me. Hopefully next week’s long goes better!

How did your long run go this week?

Do you go walking/running with your family?

My Tweets
Join 684 other subscribers